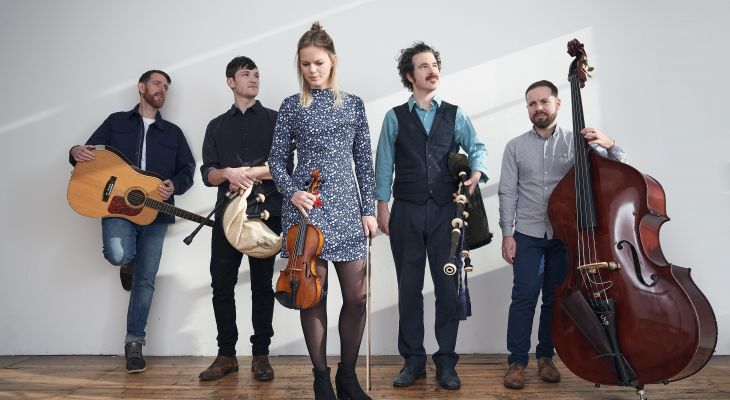 “As polished as it was passionate, matching fiery intensity with exquisite finesse, this was a magnificent set”

Securely ranked among Scotland’s most skilled and imaginative contemporary folk acts, Breabach unite deep roots in Highland and Island tradition with the innovative musical ferment of their Glasgow base. They have released six increasingly acclaimed albums, whilst fuelling their creative appetites in collaborations with indigenous Australasian artists Moana and the Tribe & The Black Arm Band, Quebec’s Le Vent du Nord, video game composer Big Giant Circles and as artists-in-residence at the 2019 Celtic Colours festival with Cape Bretoners, Beolach. 2020 saw the introduction of the supremely talented, multi-instrumentalist Conal McDonagh to the band which coincided with the production and release of ‘Dùsgadh’, a newly commissioned short film in with original score in collaboration with BAFTA award winning animator Cat Bruce.

Their 17 year adventure has included live performances from Sydney Opera House to Central Park NY. They have racked up an impressive array of accolades including five Scots Trad Music Awards, nominations as ‘Best Group’ in the BBC Radio 2 Folk Awards and ‘European Album of the Year’ in The Songlines Music Awards.

Breabach show no sign of slowing their creative endeavours with imminent tours and festival appearances across the UK, Europe and the US to mark the release of their 7th studio album 'Fàs' produced by renowned musician Inge Thompson (Karine Polwart, Hen Hoose, Northern Flyway).

Breabach are; Megan Henderson (Fiddle, Vocals, Step Dance), James Lindsay (Double Bass, Vocals), Calum MacCrimmon (Bagpipes, Whistle, Bouzouki, Vocals), Conal McDonagh (Bagpipes, Whistle, Vocals) and Ewan Robertson (Guitar, Vocals, Cajon). Acknowledging and respecting the origins of both the music they play and the roots of the band whilst embracing the future with new ideas, energy and belief is a key attribute of the band and has remained a constant theme throughout their 17 years.