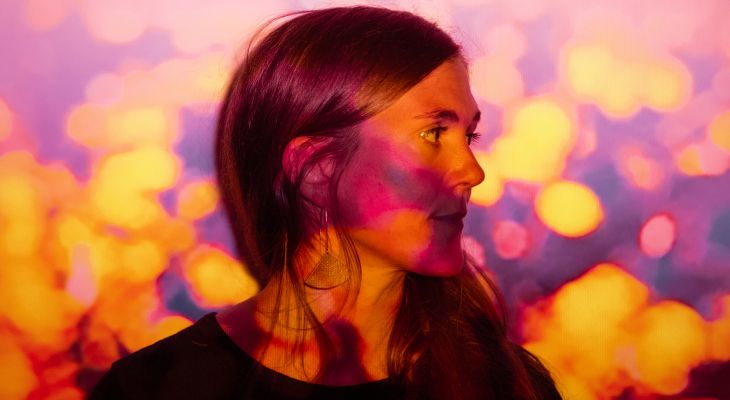 “Jenny pushes her music far beyond the realms of singer/songwriter, to a wider sphere wherewords, music and creativity combine in an inspired and thoroughly engaging work.”

Jenny Sturgeon is a singer-songwriter “who brings together the old and new with a rare skill” (R2 Magazine). Jenny's music is rich with imagery and her songs are bound together by common threads of nature and the connection people have within the landscape.

Sturgeon’s songcraft is at the centre of her engaging and honest performance, with accompaniment on guitar, harmonium and piano she has been described as “a wonderful singer who can change the atmosphere in the room with her affecting delivery” (Boo Hewerdine). Her album ‘The Living Mountain’ was nominated for the Scottish Album of the Year awards in 2021, and in 2020 won Best Acoustic at the Scottish Alternative Music Awards. Musical collaborations include writing and performing in the critically acclaimed altfolk band Salt House and in the bird and migration inspired project, Northern Flyway; a Creative Scotland and PRS Foundation funded audio-visual project that Jenny co-wrote with musician Inge Thomson - described as "like watching a David Attenborough documentary but with awesome music!”.

Jenny’s music has been played on BBC Radio Scotland, Radio 3, Radio 6 Music, Radio 2, and Radio Nan Gaidheal - including being featured as artist of the week, live sessions for Travelling Folk and BBC Radio 3 and being featured on BBC Radio 4 Front Row. Jenny's release 'The Wren and The Salt Air' - a commission for The National Trust of Scotland - featured on national STV news. Her song ‘Charmer’ was featured at number 9 of The Herald’s best 100 songs of 2018.

The Living Mountain is a solo audio-visual performance inspired by Nan Shepherd's celebrated book of the same name. The project explores Nan's writing, the Cairngorm mountain range and human connections with the wild through lyrical, melodic and visual interpretation. The live performance features music by Jenny Sturgeon and film curated by Shona Thomson; with stunning imagery from Scotland The Big Picture, filmmakers Robyn Spice and Hannah Bailey, as well as 1940s archive film from National Library of Scotland Moving Image Archive.

The meditative experience of the combined audio and imagery are a soothing and poignant exploration of what it means to connect with a landscape and to find a sense of place. The Living Mountain November 2021 tour sold out at the majority of venues and was described as an "outstanding piece of multi-media art… [where] inspired literature, gorgeously curated music and innovative filmmaking collide in a mosaic of integrated art”.