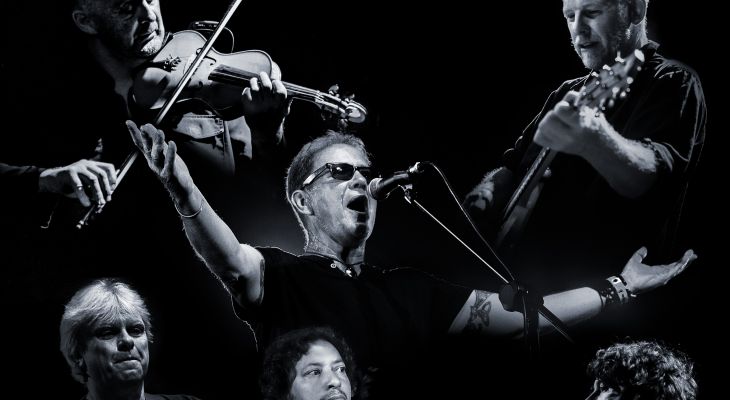 Oysterband, the five-times BBC Radio 2 Folk Award-winning outfit that brought passion, power and not a little poetry to folk and roots music, enter their fifth decade as vital and creative as ever, with some of the finest songs in the modern folk canon to their name:  Put Out The Lights; When I’m Up (I Can’t Get Down); Blood Wedding; Everywhere I Go; The Oxford Girl; Granite Years; Native Son; A River Runs… these and many others from their vast back catalogue will feature as they embark on another year of international touring and festivals.

Theirs has been a unique and fiercely independent career.  Oysterband still play with that spirit of the punk ceilidh band that roared through people’s lives all those years ago. But the growing depth and sensitivity of their songwriting, coupled with the strength of John Jones’ voice and their remarkable musicianship, have lifted their music into a richer, more acoustic era.

Their occasional collaboration with folk diva June Tabor has produced two cult-classic award-winning albums, Freedom & Rain and Ragged Kingdom. The latter and their hugely influential album Holy Bandits were voted nos. 4 and 5 among the Ten Best Albums of the last 30 years by the public in a poll by fRoots Magazine in 2016.